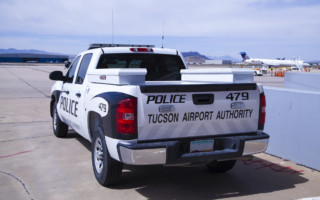 In efforts to enhance the relationships among public and government safety entities, the Tucson Airport Authority Police Department has spearheaded a new initiative called the Regional Airport Response Group.

TAA Police Captain Scott Bader was one of the originators of the group, getting in contact with local agencies across Pima County. In hopes of developing strong, working relationships with these agencies, Bader advocated on having meetings once a month. During these meetings, the organizations come together to discuss different situations that could potentially occur in the airport area.

Focusing on potential threats to the airport area, agencies share intel, experiences and resources. Agencies also train together while working through scenarios. The goal of these meetings is to learn to work together, so in the case of a situation, agencies are able to effectively work together without communication snags.

In past meetings, the group has had the Communications Sergeant from the Phoenix Airport Bureau visit to debrief on a multiagency event. As well, the TAA Chief of Public Safety debriefed the group on the Pt. Columbus Airport shooting that occurred early 2015.

Each agency could potentially play a part in the case of an emergency at the Tucson International Airport.

The mission statement of the group is as follows, “The purpose is for rapid information sharing and utilizing campus assets while incorporating local response capabilities for an all-hazard approach to threat mitigation and incident management.”