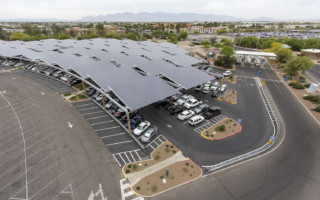 The remaining spaces in the parking lots in front of the passenger terminal at Tucson International Airport will be covered with solar canopy structures under a contract with Sturgeon Electric, Inc. that was approved by the Tucson Airport Authority Board of Directors at its meeting on March 2, 2016.

Phase II of the Solar Photovoltaic (PV) Project will cover more than 600 spaces in the Hourly and Daily lots, completing what was started in Phase I which covered 760 spaces in the Daily lot and was completed in late 2014. Construction of Phase II is expected to begin in June/July 2016 and be completed in about 12 months.

The main components of the solar canopy structure include an open metal canopy supported by metal columns with photovoltaic (PV) panels on top of the canopy. It also includes electrical infrastructure to facilitate direct connection to the terminal’s central plant power system. Phase II is anticipated to produce 1.74 MW of energy. Construction is expected to begin later this year.

“This project delivers on TAA’s commitment to a sustainable environment and as a side benefit, provides additional shaded, covered parking for our customers in the hourly and daily spots,” TAA CEO/President Bonnie Allin said. “Phase I has reduced our purchased electricity usage in the terminal by approximately 34 percent and when Phase II is completed, we anticipate usage being reduced 68-70 percent. This is a true model project for our Solar City.”

This project is being funded partially by TAA, along with grants from the Federal Aviation Administration (FAA) and the Arizona Department of Transportation (ADOT). Nearly 88 percent of the total project cost will be funded by the FAA.