About 12 miles northeast of downtown, Portland International Airport is off Interstate 205. It usually takes a solid half-hour to drive between the airport and downtown Portland.

The floor plan layout for Portland airport’s terminal is in the shape of an H, especially if you look at it as if one of the legs of the H bends at the knee. Check-in counters and baggage claim for all airlines are on the cross bar of the H and the five concourses are the extensions at the north and south ends. The South Concourses contain the A, B and C gates and the North Concourses have the D and E gates. (The bent leg of the H is made up of the A and B gates.)

Be advised the PDX terminal is in the midst of a construction project due to be completed in 2023. The connector walkway between the North and South concourses is closed so passengers must go through the TSA Checkpoint serving their departure gate. Also the A gates area is closed and there are temporary bypass walkways connecting the B and C gates on the South Concourses and the D and E gates on the North Concourses.

Leaving the airport, most ground transportation options can be found on the roadway outside baggage claim. Cross the roadway to the first island for shuttles and buses, to the second island for app-based ride services and to the third island for taxis. Beyond that are car services and rental car companies on the first floor of the parking garage. The Trimet Max/Light Rail is on the main level of the terminal, at the far south end of the ticket lobby. The Red Line departs PDX about every 15 minutes with a scheduled time to downtown Portland of 38 minutes.

Alaska Airlines flights arrive and depart PDX on the South Concourses using the B and C as well as the North Concourse D gates. Be advised the concourse connector is closed during construction so passengers connecting between the D gates and the B or C gates will have to exit the secure area and be re-screened by TSA. Otherwise passengers can make connections within the B and C gates areas without leaving the secure area. The same is true for passengers making a connection between one D gate and another D gate.

Portland prides itself on its eclectic appeal. It was one of the first cities in the U.S. to embrace the microbrewery phenomenon and now has more than 75 craft breweries in the metro area. The City of Roses and the area surrounding it is known for its scenic beauty. The city is also known for its eco-friendly urban planning.

Travel Portland has some ideas for planning your visit here.

Things to See and Do Around Portland

The world’s smallest park is in Portland 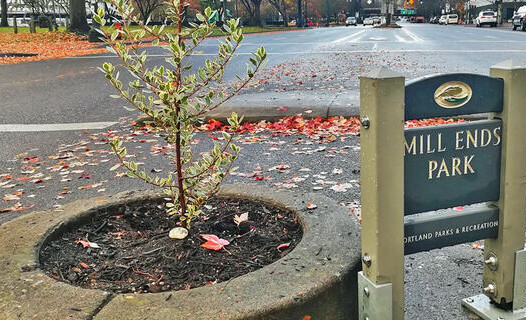 Confirmed by the Guinness Book of World Records, it’s a tiny urban park consisting of 452 square inches – 0.00007205784 acres, according to the City of Portland – located at SW Naito Parkway and Taylor Street. It originated in the mind of Dick Fagan who wrote a column in the Oregon Journal called Mill Ends (wood scraps left over in the milling process). Fagan’s office on the second floor overlooked the roadway and median and he would often write about the happenings in “the only leprechaun colony west of Ireland” headed by one Patrick O’Toole. He had a dedication for the park on St. Patrick’s Day 1948 and it became a city park on St. Patrick’s Day 1976. Learn more here.