Los Angeles International is the busiest airport on the United States West Coast and is unique among the country’s largest airports, in that while it is served by more than 70 airlines, including all major domestic carriers, no single carrier dominates passenger traffic.

The LAX terminal area is west of the intersection of South Sepulveda Boulevard and Century Boulevard, which becomes World Way west of the intersection. The airport is also accessed via Century Boulevard from Interstate 405, about 7 miles to the east. Distances and drive times in normal traffic, between the airport terminal and some popular destinations are:

The LAX passenger complex consists of nine terminals – 9½ if you count terminal 1.5 separately – arranged along the two-level loop roadway that makes what is essentially a large U-turn around parking garages, the airport’s iconic space-age theme building and air traffic control tower. The upper roadway is the check-in level for departures and the lower roadway is the baggage claim level for arrivals.

Terminals and airlines in order along World Way are:

Because there are more than 10 gates in each concourse, gates often also include a letter, such as gates 52A-52J.

* Check-in for departures on these airlines is at the terminal indicated above but passengers may be shuttled or use a walkway to the Tom Bradley Terminal (Terminal B) to board their flight. International arrivals on Alaska, American, Delta, JetBlue, Southwest and Spirit that were not pre-cleared by U.S. Customs at their departure airport are in Terminal B at LAX.

An Airlines Connections shuttle operates at 10-minute intervals along the lower level roadway. Passengers should stand at the pink signs. Passengers leave the TSA secure area to use the service. The shuttle is popular for international arrivals at the Tom Bradley International Terminal who are required to exit security after going through U.S. Customs. 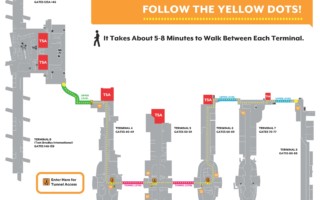 In many other cases passengers can use walkways within the TSA secure area to make connections. Currently a walkway connects terminals 1 and 2 and a series of walkways connect terminals 4, 5, 6, 7, 8 and the Tom Bradley International Terminal. Most of the walkways are on the upper level near the entrances to the concourses, except the two that connect terminals 4, 5 and 6 are underground tunnels accessed at the midpoint of the concourses (see diagram).

A $16 billion LAX Modernization Program is underway that includes construction of an Automated People Mover train system due to open in 2023. It will connect passengers  between the terminals and a transit and rental car center outside the airport. The program also includes construction of what’s called “Terminal 0,” an expansion and additional concourse to Terminal 1, and “Terminal 9,” an additional concourse east of Terminal 8. The entire airport modernization program is expected to be completed ahead of the 2028 Olympic and Paralympic games to be held in Los Angeles. LAX has construction updates here.

During construction of the People Mover, the airport is operating a shuttle service called LAX-it (pronounced LA Exit) to take passengers from the terminals to a temporary consolidated pick-up location for all taxis and app-ride services, which are not permitted to pick-up passengers curbside at the terminals due to roadway congestion. The green-and-black shuttles operate every 3 to 5 minutes along a dedicated lane on the lower level roadway outside baggage claim at each terminal. Taxis and app-ride services continue to drop-off passengers on the departure level at each terminal and major car rental companies continue to operate their own shuttles both ways between the terminals and their locations.

American Airlines flights arrive and depart LAX at gates 40-59 in Terminals 4 and 5 and gates 110-159 in the Tom Bradley International Terminal. All of American’s gates can be reached without exiting the TSA secure area. Most flights operated on American Eagle aircraft arrive and depart from gates 52A-52J, which is in a remote terminal reached by shuttle bus. The shuttles arrive and depart near Gate 44 in Terminal 4 and near Gate 50B in Terminal 5. Otherwise, connecting passengers going between terminals 4 and 5 can use an underground tunnel accessed at the foot of escalators down from near gate 44 and at the mid-way point of the concourse in Terminal 5. Going between Terminal 4 and the Tom Bradley International Terminal passengers can use the walkway near gate 41. Check-in for American Airlines flights at Terminal 4 for flights departing from  gates 40-49 and 110-159 or at Terminal 5 for flights departing from gates 50-59. The first phase of a  $1.6 billion modernization of Terminals 4 and 5 opened in early November 2022 combining the two check-in areas and providing more space with connectivity to the Automated People Mover that is under construction. The entire project is due to be completed in 2027.

Delta Air Lines flights arrive and depart LAX at gates in Terminals 2, 3 and the Tom Bradley International Terminal. Delta has consolidated its LAX check-in into one facility stretching across the entrances of Terminals 2 and 3. It is part of the airline’s $1.9 billion Skyway refurbishment of its facilities at LAX. Gates and facilities are opening in phases through 2023. After check-in passengers on Delta flights departing from the Tom Bradley International Terminal take a shuttle while a walkway connecting the terminals is under construction.

Southwest Airlines LAX check-in and departures for all flights are in Terminal 1, gates 9-18. Returning international arrivals are in the Tom Bradley Terminal. After clearing U.S. Customs, international passengers connecting to domestic flights on Southwest can take the inter-terminal shuttle (A Route) to return to Terminal 1.

Sun, surf, sand, beaches, glamour, Hollywood, movies, TV, music and theme parks all make Los Angeles and Southern California a place of dreams. It is also an economic powerhouse with a gross domestic product output of more than a trillion dollars annually, ranking third in the world behind Tokyo and New York. It is also home to the busiest seaport in the United States.

Information for planning a trip is at Discover Los Angeles.

Things to See and Do Around LA 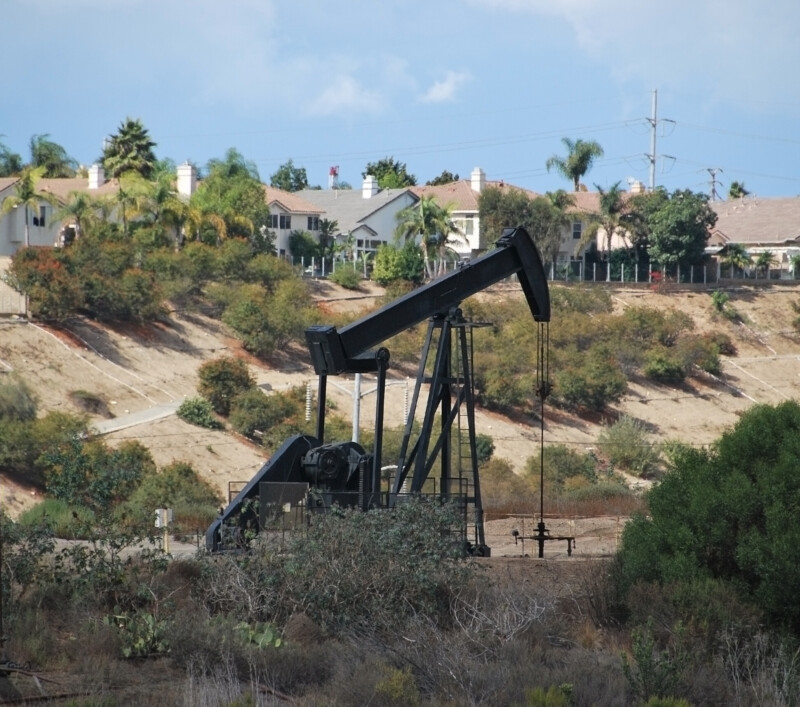 Oil was so close to the surface in 1892 Los Angeles, it was discovered using a 60-foot log from a eucalyptus tree sharpened at one end like a pencil. It set off an oil boom that at the time produced 45 barrels a day. Places including Beverly Hills, Long Beach, Venice and Huntington Beach were built over the top of former oil fields. And while reserves have been reduced, the industry is still active. Beverly Hills High School was receiving $1.1 million a year for a well on campus that was pumping 300 barrels (about 12,600 gallons) of crude oil a day until it was ordered shut down as of December 31, 2016. Some wells are concealed behind façades while others are in plain sight near homes and buildings and in parking lots. In case you are looking to find one, the California Department of Conservation has an interactive well finder map here.