At more than 33,500 acres, Denver International is the largest airport in the United States by land size and, at 16,000 feet, the airport has the longest runway of any commercial airport in the country. Opened February 28, 1995, the airport is about 23 miles east of downtown Denver off Interstate 70, a drive that takes 45 minutes in normal traffic.

The Denver airport terminal complex features a central building (Jeppesen Terminal) for check-in and baggage claim and three concourses, lettered A, B and C, which are reachable using an underground people mover, called the Automated Guideway Transit System. Concourse A is also connected to the central building via bridge walkway. Frontier, Southwest and United airlines all use DEN as a connecting point that account for about 40% of the airport’s passengers. All airline gates on all concourses can be reached without exiting the TSA secure area using the underground people mover.

Ground transportation from the Denver airport includes app-based ride services, taxis, shuttles and car services, which are all located outside level 5 (baggage claim level). This includes car rental companies which each use their own branded shuttles to take customers between the terminal and their facilities on airport property.

Denver’s Regional Transit District offers train service between the airport and Union Station downtown where passengers can connect to other services, including light rail and local and regional buses to reach destinations throughout the metro area. Called the A Line, the train between the airport and Union Station has six stops and is scheduled for 37 minutes. To reach the train stop at the airport follow the signs to the Transit Center on level 5 (baggage claim level) then proceed to the south exit and take the escalator in the center of the plaza down to level 1.

Southwest Airlines flights arrive and depart Denver at gates on the C Concourse. Passengers connecting to other Southwest flights stay on the same concourse and do not exit the TSA secure area. Southwest’s check-in counters and baggage claim are in the Main Terminal’s East side.

Embracing its cowboy and mining past and mixing it with a forward-looking attitude, the Denver metropolitan area of nearly 3 million people is the hub of the spectacular Rocky Mountain region for skiing as well as year-round outdoor activities.

Things to See and Do Around Denver 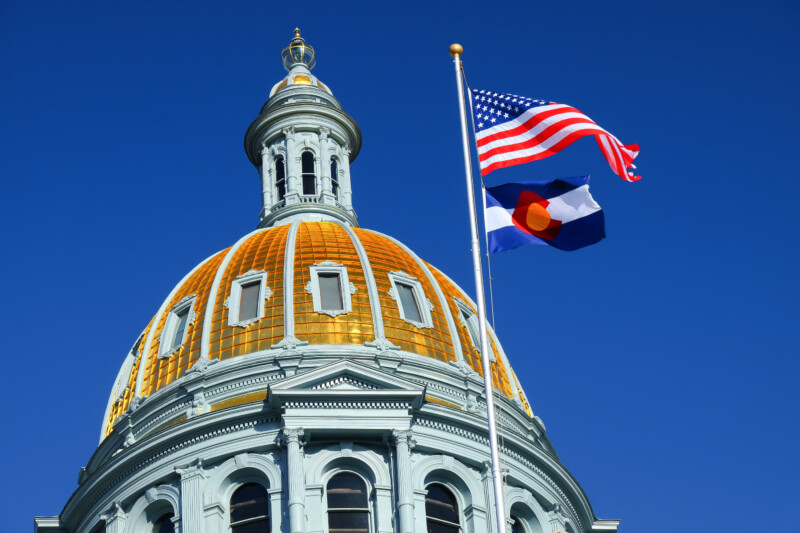 The 13th step of the west side entrance to the Colorado State Capitol is at an elevation of exactly 5,280 feet. While you are there, look up at the dome, plated with 200 ounces of 24-karat gold leaf. Step inside and you will see what is believed to be the entire known supply of Colorado Rose Onyx, a rare marble that came from a quarry near Beulah in the south central part of the state. Learn more about Colorado’s State Capitol here.