Contained within a square-mile on Chicago’s southwest side, Midway Airport’s terminal straddles Cicero Avenue. Passengers check in with their airlines on the east side of the street and then use a bridge over the street to get to the gates on the west side. The current airline passenger terminal was completed in 2001 but the airport itself dates back to 1923 when it was a landing strip for four years before it was acquired by the city and became Chicago Municipal Airport. Renamed in 1949 for the World War II naval Battle of Midway, the airport lays claim to being Chicago’s “close-in” airport. 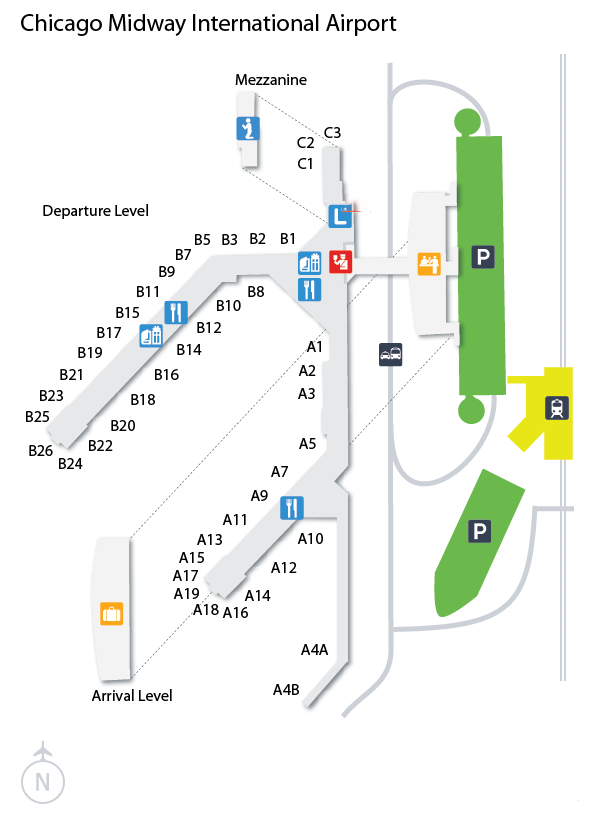 Midway has one terminal with two main concourses, A and B. There is also a three-gate area labeled as Concourse C. All of the gate areas are connected inside the TSA secure area.

The Orange Line of the Chicago Transit Authority’s ‘L’ train operates from the airport to the downtown Loop with a scheduled travel time of just under 25 minutes. The transportation center (indicated in yellow on the terminal map) can be reached using an enclosed walkway. Follow signs for ‘CTA Trains’ or ‘Trains to the City’ along with an orange line painted on the ground. Information about CTA trains to/from the airport is here. Several CTA and Pace suburban bus routes also serve Midway Airport’s transportation center.

Southwest Airlines flights arrive and depart at gates on the A and B concourses. Passengers making connections to other flights can do so without exiting the TSA secure area.

Opened in 1955 to accommodate first-generation jet airliners on its long runways, O’Hare Airport’s passenger terminal featured an innovative design using what architects called “fingers,” now commonly known as concourses, radiating out from central terminal buildings. The concept was changed for Terminal 1, which opened in 1987 and features linear concourses reached by way of an underground tunnel. The airport terminals are at the west end of Interstate 190, the Kennedy Expressway, and are closest to Chicago’s northwest suburbs. Downtown Chicago is about 18 miles southeast and takes about 40 minutes in normal traffic.

ORD is a major hub for both American and United airlines. In 2022 the flight data platform OAG ranked O’Hare as the “world’s most connected airport“.

In an effort to restore reliability and improve efficiencies, the Chicago Department of Aviation has embarked on mutli billions of dollars worth of construction projects. A $6 billion redesign and upgrade to the runway system completed in 2021 has resulted in 65% fewer flight delays, according to airport officials. Now attention has turned to $8.5 billion worth of  improvements that will refocus use of the terminals by reorganizing them to group airlines with their alliance partners as well as add more gates.

The first project of the terminal projects is transitioning Terminal 5 into the ORD home to Delta Air Lines and its SkyTeam alliance partners and provide more gates for independent low-cost airlines. The second project, expected to begin in 2023, adds two satellite concourses, one of which will become the new home for international flights (moving from Terminal 5). The third project is an entirely new “global terminal” built in place of the existing Terminal 2 that will give passengers direct access between international carriers and O’Hare’s two major hub airlines; United and its Star Alliance partners in Terminal 1 and American, Alaska and Oneworld partner airlines in Terminal 3. The entire project is expected to be completed in 2030 and increase ORD passenger capacity by 25% to more than 100 million annually.

O’Hare has four terminals. Terminals 1, 2 and 3 are grouped together and connected by walkways, both pre- and post-security. Terminal 5 (there is no terminal 4) is separate and currently handles all international arrivals, except those coming from airports where passengers were pre-cleared by U.S. Customs.

The terminals and their airlines are:

* International arrivals for these airlines that were not pre-cleared by U.S. Customs at their departure airport are in Terminal 5. All departures are in the terminal indicated above.

The Airport Transit System (ATS) automated people mover operates every three minutes 24/7 transporting passengers among all four terminals and the Multi-Modal Facility, which houses rental cars, an economy parking lot, Pace intercity buses and is across the street from the O’Hare Metra North Central rail station. To use the ATS, passengers must exit the TSA secure area.

Shuttles to hotels, regional destinations and off-airport parking arrive and depart from the Bus/Shuttle Center, which is accessed using pedestrian tunnels one level down from baggage claim in terminals 1, 2 and 3. Passengers arriving at Terminal 5 should take the ATS people mover to Terminal 1 and use the pedestrian tunnel from there.

The Blue Line of the Chicago Transit Authority’s ‘L’ train is scheduled to make the trip to downtown in about 45 minutes. Signs in the terminals point the way to the train station on the lower level of Terminal 2. Information about CTA trains to/from the airport can be found here.

Get Blown Away By the Windy City

With nicknames including The Windy City, Second City, City of Big Shoulders and The City That Works, Chicago’s Midwest location has long made it a hub for commerce. With a population of 9.5 million, Chicagoland as it’s sometimes called, is the third largest metropolitan area in the U.S. behind New York and Los Angeles.

Things to See and Do Around Chicago

A replica of the original Ferris Wheel still operates in Chicago 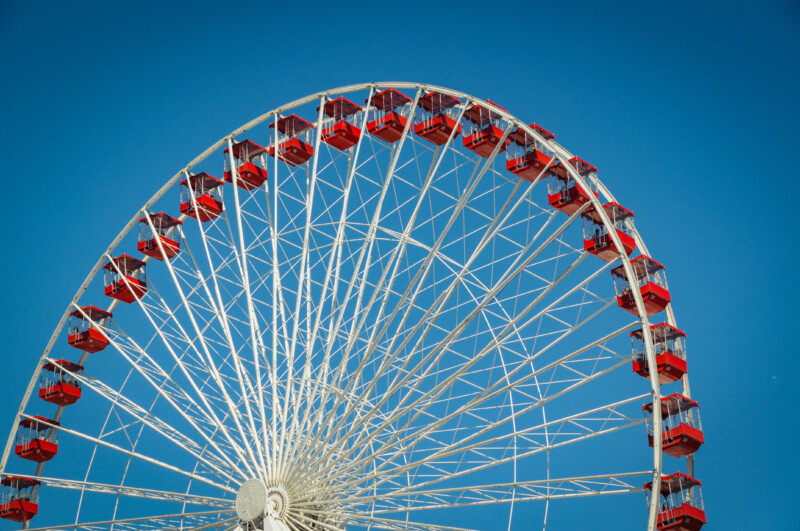 It may be known as “the second city” but Chicago has been home to many “firsts.” Inventions that have made lives easier such as the vacuum cleaner (1868) and mechanized dishwasher (1886), while others were technological advances like the wireless remote control (1955) and the cell phone (1973), which by the way weighed in at nearly 2½ pounds and operated for up to 30 minutes after a 10-hour charge. Getting dressed was made more convenient with the invention of the zipper (1851). Tasty edibles include the brownie (1893) and the Twinkie snack cake (1930). Nowadays, nearly all of these items can be enjoyed pretty much anywhere. But the closest you will come to experiencing George Ferris’ Wheel (1893) amusement ride is a nearly 200-foot tall replica of the original that operates at Navy Pier. Learn more about the Centennial Wheel here.