TUS Welcomes Back Allegiant Air with Low Fares to Indy, Provo and Vegas

On February 11 Tucson International Airport (TUS) welcomes back Allegiant Air and its ultra-low fare nonstop flights to Indianapolis and Provo, Utah. On February 18, Allegiant is scheduled to add flights to Las Vegas.

“This is an important milestone in our continuing efforts to restore air service lost during 2020 to the impacts of COVID-19,” said Danette Bewley, President and CEO of the Tucson Airport Authority. “We could not have predicted the devastating impact that took place in our industry and our region that relies so much on our winter visitors. We look forward to welcoming back our friends from Indiana, Utah and Nevada.”

With Allegiant’s return, flights to all but three nonstop destinations from TUS have been restored and one more is due to return March 13 when Southwest Airlines is scheduled to relaunch flights to and from San Diego.

The pandemic has also caused airlines to rethink some operations. Two new nonstop destinations from Tucson have been added by Southwest: Houston Hobby flights were started in October and Oakland flights are scheduled to start March 11.

Allegiant will fly to/from all three destinations twice each week, on Thursdays and Sundays. Currently, the airline is offering fares less than $50 one way on each of the routes. Book reservations at http://www.allegiantair.com/ 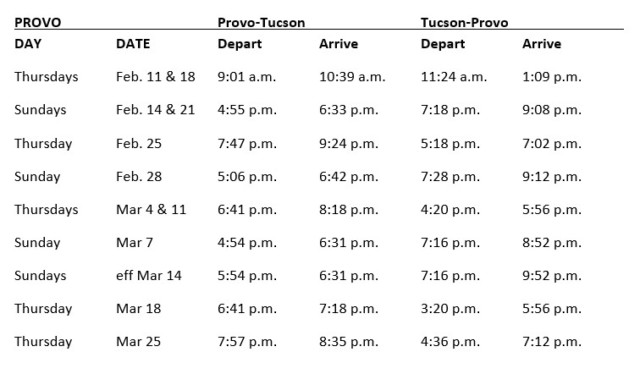 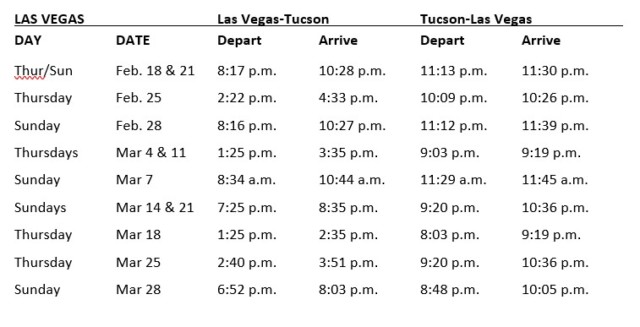