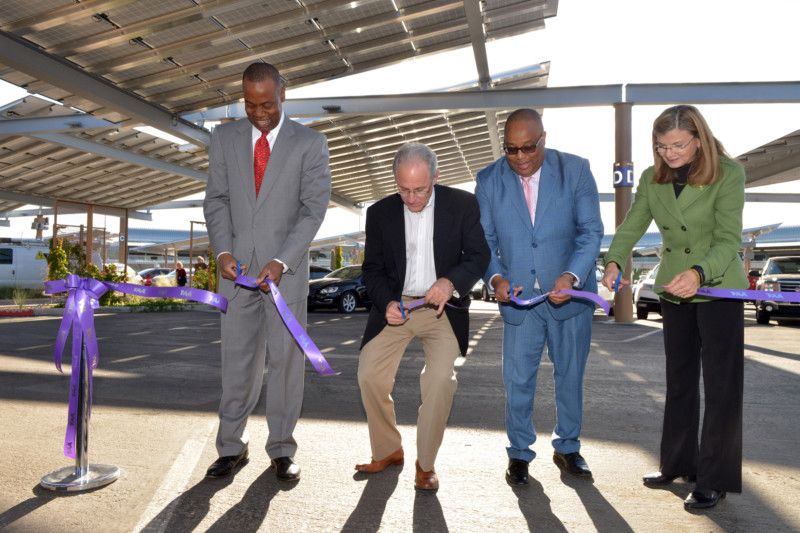 The Tucson Airport Authority (TAA) celebrated the completion of the Tucson International Airport (TUS) Solar Project on December 6 with a ribbon cutting ceremony. The $14.3 million project is expected to generate an additional 411,800 kilowatt hours (kWh) monthly at a savings of $35,000 per month at TUS. The energy generated powers up to half of the electricity in the terminal and concourses.

At the ribbon cutting dedication, TAA welcomed Mayor Jonathan Rothschild, FAA Regional Manager Mark McClardy, TAA Chairman Tony Finley and TAA President and CEO Bonnie Allin spoke to a crowd of guests that included the local businesses involved in the project. Each speaker validated the importance of the finished project and what it means for Tucson.

“We’ve had solar projects proposed throughout the country but I have to say that this is one of the most successful that I’ve seen in the country and certainly one of the most successful in the region that I have,” McClardy said. “It takes a vision to do this. It doesn’t come from osmosis. This is beautiful. It’s more than the solar benefits that you’re getting from this. It’s the passenger experience.”

“This landmark solar project is significant for the airport as well as our community because it saves money while creating jobs and additional economic opportunities here in Tucson,” explained Allin. “We could not be more appreciative of the FAA’s support of our vision for a cutting edge solar project that not only benefits the environment but that also has a collateral benefit of covered parking for our customers. Additionally, it showcases the airport and community’s strong commitments to environmental and social responsibility as visitors flying into Tucson immediately see the value we place on clean, efficient and affordable production of electricity.”

The project was split into two phases, and started in 2013. Phase I included the installation of 51 solar panels while Phase II installed 78 solar arrays. Both phases brought the overall environmental and savings impact to a reduction of 25,000 gallons of gas per month and 245 tons of carbon dioxide (CO2) per month.

The project was funded by grants from the Federal Aviation Administration (FAA) and Arizona Department of Transportation (ADOT) with a matching contribution by TAA. The FAA funded 91.06% of the project.