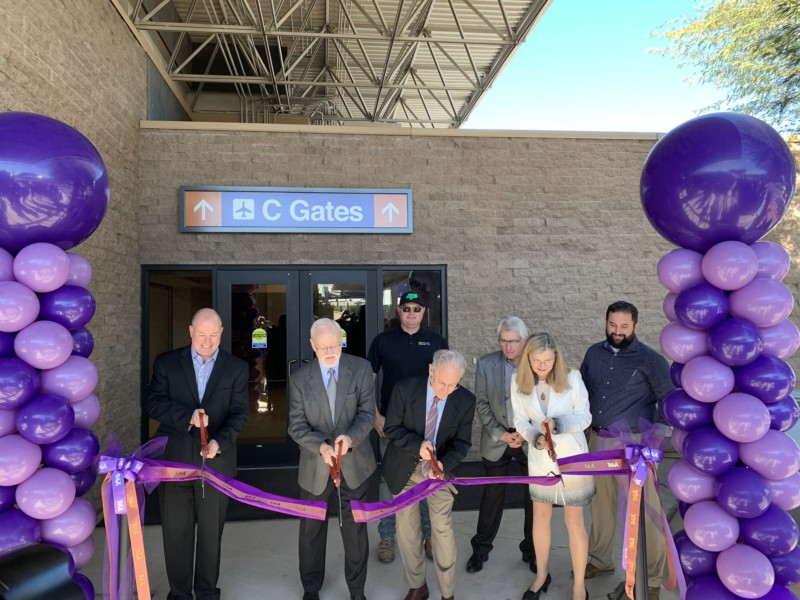 Cutting the ribbon to open the new C Gate facility at Tucson International Airport are, from left, Brent DeRaad, President/CEO of Visit Tucson; Bruce Dusenberry, Secretary of the Tucson Airport Authority Board of Directors; Tucson Mayor Jonathan Rothschild; Bonnie Allin, President and CEO of the TAA.  Behind them, from left are Justin Tunstill from S D Crane Builders and Richard Beach and Ryan Schmitt from DL Group architects.

With a snip of scissors, the ribbon was cut and the new C Gates were opened at Tucson International Airport on Monday (January 7, 2019). Passengers will start using the building Thursday when Allegiant is scheduled to begin operations there.

Mayor Rothschild, who has championed the efforts to bring Allegiant Air and other ultra low cost airlines to Tucson, said the new facilities helped make it possible for airlines to grow service to new destinations, which is good for the tourism industry as well as for Tucsonans who want to go to more destinations.

In fact, Rothschild suggested the new facilities be called Terminal T for tourism one of his core pillars for Tucson.

Starting Thursday, January 10, passengers leaving from gate C1 should go to the new facility, which is separate and about 300 feet west of the airport’s main terminal. Long-time users of the airport may remember it as the former International Terminal until 2008. The building now also houses U.S. Customs and Border Protection’s Global Entry Enrollment office.

So far, only Allegiant has opted to use the new C Gates facility on a regular basis but other airlines may follow and it can also be an option for charter flights.

The TAA is looking at the possibility of expanding the C Gates facility in the future.

In the meantime, passengers departing from the C Gates should know: