Nonstop Flights Between Canada And Tucson, Arizona To Start Next Winter

More Canadians will be able to enjoy the warmth and beauty of Tucson – and Arizonans can shred the slopes of the Great White North – starting next winter under an innovative new agreement that will bring Flair Airlines to Tucson International Airport (TUS).

The agreement, announced at TUS today, is a partnership among Flair Airlines, Visit Tucson, the Tucson Airport Authority, and five Canadian airports.

For travelers, it means Flair Airlines will introduce nonstop flights next winter between TUS and the five Canadian airports. These will be the only nonstop flights to the United States for four of the airports: Fort McMurray (YMM) and Lethbridge (YQL) in Alberta, Prince George (YXS) in British Columbia, and Windsor (YQG) in Ontario. The fifth airport is Edmonton International (YEG), which is also Canada’s fifth largest airport and an important logistics hub serving 1.8 million people living in the region around Alberta’s provincial capital city.

From an air service perspective, the agreement establishes a “U.S. winter crew base” in Tucson. The base will act as a temporary “home” for Flair’s Canadian-based crews so flights can be scheduled to start and end at TUS.

“We are excited to partner with Flair and Visit Tucson to add nonstop flights to and from Canada.” said Danette Bewley, President and CEO of the Tucson Airport Authority. “TUS will be the exclusive Arizona – and U.S., for that matter – destination from four of those airports. We look forward to welcoming and introducing Canadians to our beautiful region.”

Bewley added, “In addition to new international air service, there is tremendous economic potential for Southern Arizonans and Canadians to develop new connections and relationships.”

Visit Tucson was active in helping to secure the new flights through a marketing commitment.

“When you have the right partners, who also share your values and passion, it’s possible to achieve amazing results and that is what we have here thanks to the Tucson Airport Authority and five Canadian airports in conjunction with an innovative airline such as Flair,” said Felipe Garcia, President and CEO of Visit Tucson. “We look forward to welcoming our visitors from Canada, and I hope Tucsonans will also take the opportunity to explore our partner communities up north.”

“Basing winter operations in Tucson, Arizona offers an exciting new option for Canadians. We know that Canadians in communities across the country will be keen to soak up the winter sun in Tucson. With consistent service for years to come, we think this is the beginning of an excellent yearly tradition for Canadians,” said Garth Lund, Chief Commercial Officer, Flair Airlines. “For too long, many communities in Canada have been without service to warm weather destinations. Flair is looking forward to stimulating new demand with our everyday low fares.”

Bewley also highlighted the support from U.S. Customs and Border Protection and Port Director Roger Wheaton. The flights to Arizona, excluding those from Edmonton, will come from airports without U.S. Customs pre-clearance, so arriving passengers from those airports will clear U.S. Customs after they land at TUS.

The new flights are currently scheduled to start at the end of November with fares as low as $99CAD/$79USD one way. Flights are available for booking now at https://flyflair.com.

The planned schedule:
Subject to change 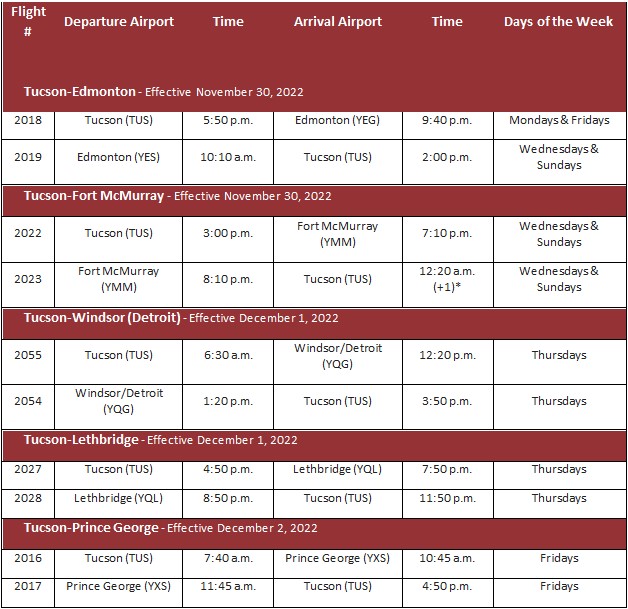 *Arrives after midnight the next day

Based in Edmonton, Alberta, Flair Airlines is Canada’s only independent ultra-low-cost carrier (ULCC) and has been trailblazing with an ambitious rapid expansion to disrupt the monopolistic practices of Canada’s airlines.