Deadline is May 3, 2023 for Passengers to Get Federally-Required Real ID to Fly 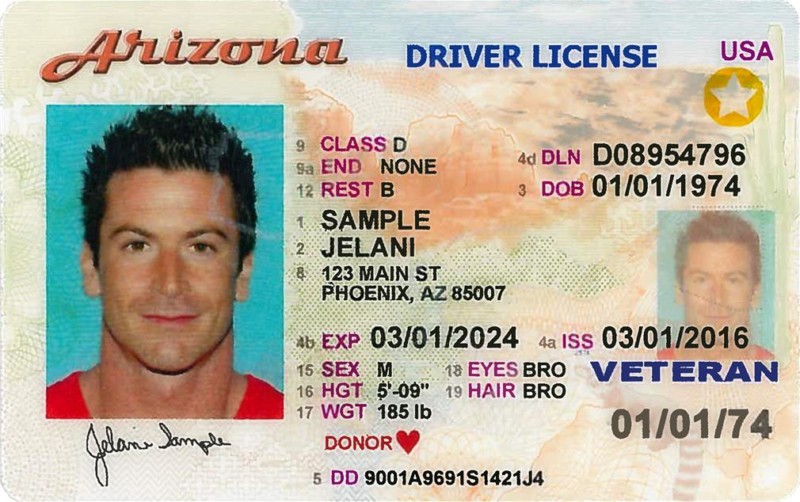 Starting May 3, 2023, commercial airline passengers ages 18 and older will be required to show identification that complies with the Real ID Act to clear Transportation Security Administration (TSA) checkpoints at all U.S. airports. After postponing earlier deadlines, the U.S. Department of Homeland Security will begin enforcing the requirement on May 3, 2023.

Arizonans who use their driver’s license or ID card to go through TSA security, should consider getting the voluntary Arizona Travel ID through the Arizona Department of Transportation (ADOT) Motor Vehicle Division to be assured of having it when enforcement begins. The Travel ID can be combined and used as a driver’s license, but the standard Arizona Driver License does not comply with Real ID security requirements and will not be accepted by TSA as of May 3, 2023. The Travel ID is easily distinguished from a standard ID by a star cutout inside a gold circle in the upper right corner on the front of the card.

To meet security requirements of the Real ID Act, passed by Congress in 2005, applicants for an Arizona Travel ID must provide a Social Security number plus documentation showing your full legal name, date of birth, two proofs of address for your principal residence and your legal status. The cost for the Travel ID is $25 and in most cases it will be valid for up to eight years.

While driver’s licenses are the most common ID used at airport checkpoints, other IDs the TSA will accept as Real IDs starting May 3, 2023, are:

IDs must be currently valid and not expired.

Not acceptable as Real IDs are standard state-issued driver’s licenses and IDs, temporary driver’s licenses, weapons permits and any document that includes a notation that it cannot be used as a federal ID.

Why the concern now about getting a Real ID?

The countdown clock is ticking with less than six months for passengers to have a compliant Real ID to go through airport TSA checkpoints. A driver’s license or ID is the most frequently used ID at checkpoints and state officials are concerned they will face a crush of last-minute applications for the compliant version, called the Arizona Travel ID, or worse, some passengers won’t know to get one and will be turned away by TSA and unable to board their airline flights as of May 3, 2023 when enforcement begins.

Wait, what? I have to get a new driver's license to fly?

Yes, in a way. It’s not the driver’s license that is changing, it’s the ID part. A Real ID must meet certain security measures as outlined in the Real ID Act. Rather than carry two cards, the compliant ID and your Arizona Driver License are combined into one card. For those who do not drive, it is possible to get only the Travel ID.

Yes, there are several that are listed above on this page. They include passports, passport cards, Trusted Traveler cards, Department of Defense IDs and photo IDs issued by a federally recognized tribe. The TSA has a complete list of other acceptable Real IDs here.

Applicants for a Real ID must provide a Social Security number and documentation showing your full legal name, date of birth, two proofs of address for your principal residence and your legal status. The Arizona Department of Transportation has more information here.

Where do I start the process for an Arizona Travel ID?

Although the process requires an in-person visit, the Arizona Department of Transportation’s Motor Vehicle Division has tried to make it as straightforward as possible. Go to ADOT Arizona Travel ID Info (or click the button above) to get step-by-step instructions, find a checklist of required documents, fill out an application and make an appointment. A map showing locations of both MVD and authorized third-party offices for an Arizona Travel ID is here.

I just renewed my driver's license, is it a Real ID?

In Arizona you will know if it is a Real ID if it has a star cutout inside a gold circle in the upper right corner on the front of the license. The Travel ID is a voluntary option that must be requested. Arizona is continuing to issue a standard driver’s license that is not Real ID compliant.

I cannot use my standard Driver License at TSA?

You can through May 2, 2023. After that you will need a Real ID-compliant identification such as the Arizona Travel ID.

My standard driver's license is not expired, what will happen if I use it at TSA on May 3, 2023?

The TSA says you will not be cleared through the checkpoint.

Doesn't TSA have other ways to prove a person's identity?

Yes, there are procedures to confirm an identity in situations when a person is temporarily without an ID. But a person who doesn’t have a Real ID and never applied for one, cannot be confirmed as someone meeting the requirement to board an aircraft.

I'm an Arizona resident but not a U.S. citizen, can I get a Travel ID?

Yes, you are eligible to apply for an Arizona Travel ID using a Permanent Resident or Resident Alien card (I-551), an unexpired United States Citizenship and Immigration Services Employment Authorization Document (EAD) or I-94 form with an unexpired foreign passport and an unexpired U.S. Visa (not required for Visa Waiver program participants).

No. Persons 17 and younger traveling with an adult do not need to show an ID. The adult, however, will need to show a Real ID as of May 3, 2023.

Does the Travel ID replace my passport?

No. A passport is still required for international travel and can also be used for Real ID purposes to go through the TSA checkpoint. In terms of hierarchy, a passport could be considered above the Arizona Travel ID, which will get you through the checkpoint. Since the Arizona Travel ID can also be your driver’s license it’s simpler to carry for domestic travel when you don’t otherwise need a passport.

Is there any other reason to get a Real ID, besides using it at TSA?

Certain federal facilities, including most under the jurisdiction of the Department of Defense, will also require Real ID-compliant identification to gain access.

I'm not going to fly and I'm not in the military, is there any problem keeping my standard Arizona Driver License?

No, that is your prerogative. In fact, in Arizona the default is to issue a standard Driver License or ID. The Arizona Travel ID is voluntary and must be requested.

Can I decide later if I want to get a Travel ID?

Yes. May 3, 2023, is when enforcement will start but if you don’t see a need for a Travel ID until later, you can wait. Just remember that under normal circumstances it will take about 15 days for you to receive your Arizona Travel ID once your application has been submitted. If there is high demand that time will increase.

Is the government using Real ID information to build a national databank?

No. Real ID is a national set of security standards, not a national identification card. The Department of Homeland Security points out that each jurisdiction continues to issue its own unique ID or license, maintain its own records and controls who gets access to those records and under what circumstances. The purpose of Real ID is to make identity documents more consistent and secure.

Is there a radio frequency identification (RFID) chip in an Arizona Travel ID?