2019 Starts Off as TUS’ 5th Busiest Year in History

2019 Starts Off as TUS’ 5th Busiest Year in History

More than one million airline passengers were served through Tucson International Airport (TUS) in the first three months of 2019, making it the 5th busiest year so far in the airport’s history. The 1,030,119 today represents an 8.8% increase over 2018. 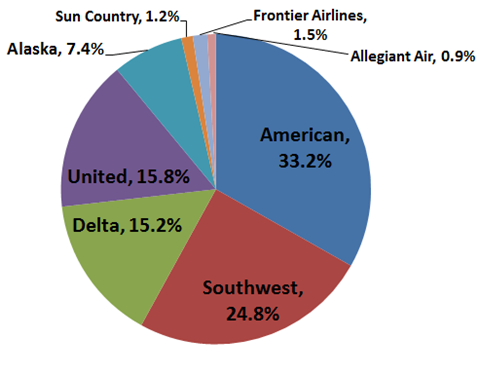 “Airlines are continuing to schedule more flights, and using larger aircraft at TUS, which shows their confidence in our region,” said Bonnie Allin, President and CEO of the Tucson Airport Authority. “Now that we’re on this roll it’s more important than ever for passengers take advantage of what’s available so we can keep the momentum growing.”

The increases are attributed to the arrivals of Allegiant and Frontier since last year, combined with the airport’s six other airlines adding flights and using larger aircraft to existing destinations.

The one negative in the numbers is that American Airlines’ total was down 8.4% in March, owing to several flight cancellations caused by weather and other issues. March has become TUS’ busiest month of the year driven by winter weary residents from colder climates seeking to escape to the sun.

American and Southwest continue to be the two busiest airlines at TUS, which combined, serve 58% of the airport’s passengers.

The Tucson Airport Authority (TAA) is an independent, non-profit organization operating Tucson International Airport (TUS) and general aviation reliever Ryan Airfield (RYN). TAA has sustained its operations since its origin in 1948 from airport generated revenues without the use of local taxes, and continues to invest millions of dollars each year in safety, security and facility infrastructure that drives job creation and economic activity for the benefit of Tucson and southern Arizona. The two airports currently support 35,000 jobs and house more than 100 tenants, and serve a diverse mix of both aviation and non-aviation related businesses, as well as military and government operations.