Far from the view of travelers in the Tucson International Airport (TUS) terminal, a small group of airfield stakeholders and project leaders joined the Tucson Airport Authority (TAA) in commemorating the start of the End-Around Taxiway Project (DBB1), which is the first of three Design-Bid-Build (DBB) projects associated with the Airfield Safety Enhancement (ASE) Program.

To recognize the start of this project, TAA staff and TAA Board of Directors leadership posed for a photo with representatives from construction contractor Granite, designers Jacobs and Dibble, program and construction manager WSP, and ranking members of the Arizona Air National Guard (AANG).

“We are excited to move forward with another milestone in the ASE Program,” said TAA President and CEO Danette Bewley. “The End-Around Taxiway Project is an integral piece of airfield safety and allows aircraft to use a taxiway that goes around rather than crossing an active runway. This work sets us up to proceed with the demolition and construction of the new parallel runway and center taxiway, which will serve the many aircraft users.. We are grateful for the partnership we have with our stakeholders and their support as we continue to implement all the phases of this project.”

The End-Around Taxiway Project construction cost is approximately $25.7 million dollars. Construction is funded by federal grants through the FAA and AANG. Arizona Department of Transportation (ADOT) was also a partner  in funding the design phase and other aspects of the ASE Program.

The project entails construction of new Taxiways F, G, and D3. Also included, the AANG’s investment will make improvements to its Arm/De-Arm Pad, Gate B Entrance, and the installation of an aircraft barrier arresting kit (BAK) system on Runway 3/21.

“As we commit to enhancing the safety of the airfield at TUS, we are encouraged by the investment of our neighbors at the 162nd Wing,” said Bewley. “We are all working towards a common goal of safety and security, and the ANG is exactly who you want to partner with on a project like this.”

Construction crews have already been hard at work since November 2021. The End-Around Taxiway Project is scheduled to be completed by January 2023. It is not expected to affect commercial airlines. In fact, most of the project will be difficult to see from the main terminal, so the TAA has established a camera system through OxBlue. Anyone interested in the progress of ASE’s End-Around Taxiway project can follow along from home.

The ASE Program is a multi-year reconstruction project that will reconfigure a sizable part of the airfield at TUS to meet current FAA safety standards. Estimated at $350+ million, the entire ASE Program includes demolition of Runway 11R/29L, which is an 8,000-foot long by 75-foot wide runway , used predominantly by general aviation aircraft. This runway will be relocated and replaced with a new parallel runway that is 11,000 feet long by 150-wide, along with a center taxiway and new connector taxiways. In addition, there will be updates to airfield geometry, including the installation of aircraft guidance systems, which will ensure current FAA standards are met. The ASE Program is expected to be finished in 6-8 years depending on available funding. 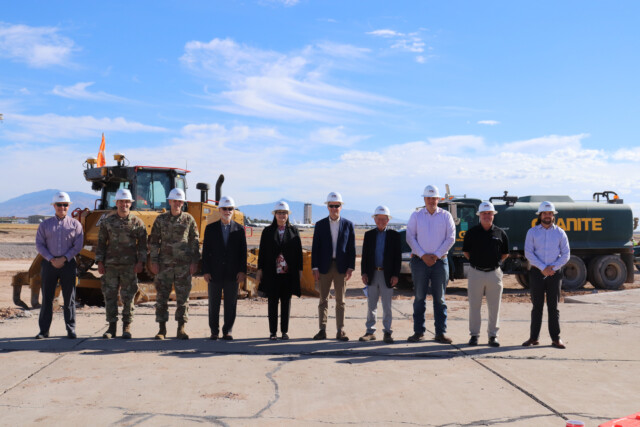