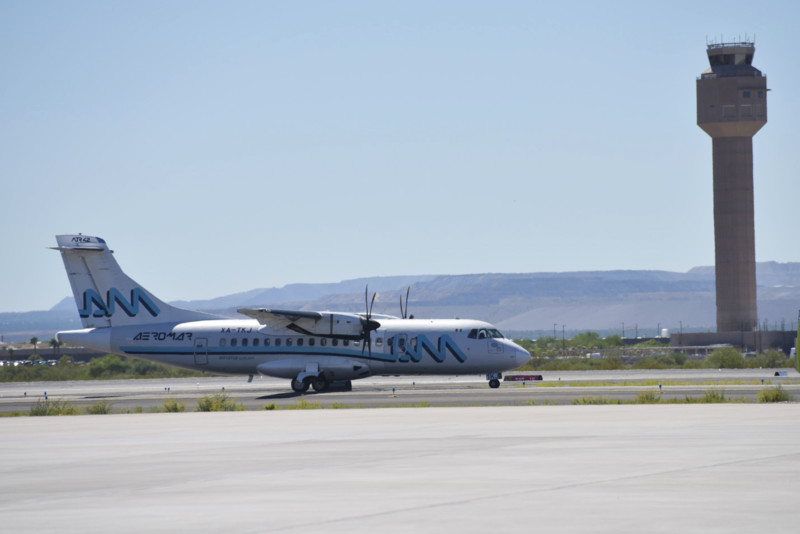 Among those on the first flight was Andrés Fabre, Director General and CEO of Aeromar, and Antonio Berumen, Secretary of Tourism for the State of Sonora. They who participated in inaugural flight ceremonies along with Councilmember Shirley Scott representing the City of Tucson; Pima County Board of Supervisors Chair Sharon Bronson; Mexico Consul Ricardo Pineda, Visit Tucson Executive Vice President J. Felipe Garcia, and Tucson Airport Authority President and CEO Bonnie Allin.

Among those on the first flight was Andrés Fabre, Director General and CEO of Aeromar, who participated in inaugural flight ceremonies along with Councilmember Shirley Scott representing the City of Tucson; J. Felipe Garcia, Executive Vice President of Visit Tucson; and Tucson Airport Authority President and CEO Bonnie Allin.

“This is a win, win, win, win, win for all of the people who worked so hard to get this flight from business leaders, from the airport, tourism and government and from the community, said Fabre. “I’m so proud Aeromar is the one that is providing this service.”

As part of his remarks, Fabre took the opportunity to announce a special airfare sale – $149 roundtrip between Tucson and Hermosillo. The special low fare sale starts Tuesday (October 4) and will be available through October 14. It is good on flights through December 12.

“Our community has been telling us this flight to Mexico was a high priority and we are so thrilled to have achieved this big step forward by re-establishing a nonstop international air link from Tucson International Airport,” said Bonnie Allin, President and CEO of the Tucson Airport Authority. “Aeromar says they are ready to add additional flights when the demand is there. So let’s show them the demand is here, now. It’s vitally important that we use these flights whenever your travel plans include Mexico.”

Felipe Garcia, Executive Vice President of Visit Tucson and Vamos a Tucson, “With Aeromar’s history of 29 years in operation, we’re looking forward to a long lasting and great partnership. This flight helps us better connect with Mexico and the $1 billion visitors from Mexico spend in Tucson every year.”

U.S. Customs and Border Protection, Director of Field Operations William K. Brooks stated, “We are pleased to help facilitate trade and travel into our nation’s economy by expanding Customs and Border Protection services to the commercial airlines in Tucson. Together, we stand to commemorate this significant milestone as a sign of Arizona’s continued growth and success. This international opportunity would not be possible without the hard work and support of many dedicated people.”

Aeromar’s schedule of flights from Tucson operates four days a week – Sunday, Monday, Thursday and Friday – aboard 48-passenger ATR-42 aircraft with high-tech fuel-efficient turboprop engines with some of the lowest greenhouse gas emission in the industry while at the same time providing low noise levels.

Those low noise levels add to passenger comfort as well as the two-by-two cabin seating, with no middle seats.

* Effective October 30, flight arrival and departure times at Tucson and Hermosillo are one hour later.

The Aeromar flights offer passengers the opportunity to travel between Tucson and other cities in Mexico without having to make a connection at Hermosillo instead of an out-of-the-way airport. Better yet, after clearing Mexico customs at Sonora’s capital city, the same flight continues on to Los Mochis, gateway to the Copper Canyon, then to the beaches of Mazatlán and end at Guadalajara.

Additionally, through codeshare agreements with Aeromexico and United Airlines, Aeromar passengers will be able to make seamless connections on to other destinations in both Mexico and the U.S. Aeromar passengers can also earn miles in either Aeromexico’s Club Premier or United’s MileagePlus frequent flyer rewards programs.