Serving a central Indiana metropolitan population of just over 2 million, Indianapolis International Airport is off Interstate 70 about 14½ miles southwest of downtown Indy, as it’s known for short. Drive time between the airport and the heart of downtown is just under 30 minutes. Indianapolis is Indiana’s largest city and the state capital. 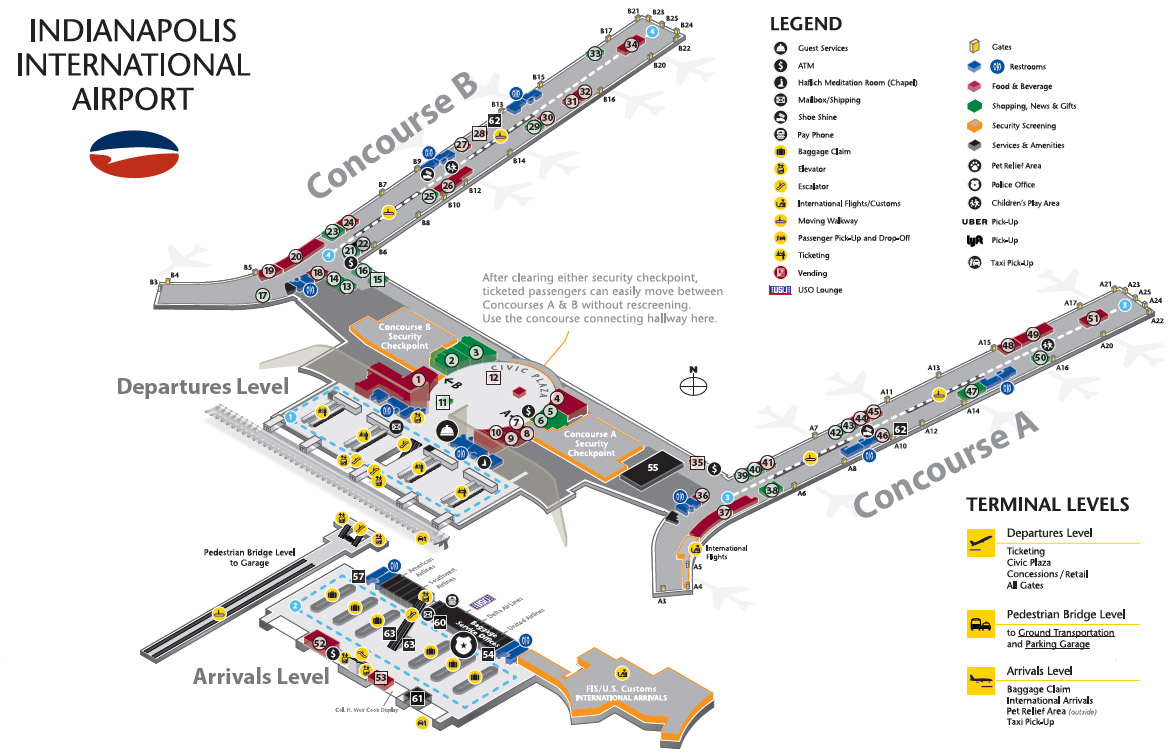 The Indianapolis airport terminal is a three-level facility opened in 2008 as the first international airport designed and built after 9/11. The lower level is for arrivals and includes bag claim. The middle level contains a pedestrian bridge leading to a parking garage and ground transportation. The third level is for departures and includes airline check-in counters and the entrances to the airport’s two concourses, A and B. The concourses are connected post-security by a walkway.

For arriving passengers there are the usual ground transportation options leaving the airport, including app-based ride services, taxis, car services and courtesy vehicles. There is also scheduled express bus service every half-hour from the airport to downtown Indianapolis, as well as other routes that go to Muncie and Ball State University, Bloomington and Indiana University and to Lafayette, West Lafayette and Purdue University.

Allegiant Air flights arrive and depart from gates on Concourse B in Indianapolis. Although Allegiant flies to numerous destinations from Indianapolis, it does not offer connecting service so all passengers leave the airport upon arrival. As at all airports, Allegiant begins check-in 2 hours ahead of scheduled flight time and closes check-in 45 minutes before departure.

Get Your Motor Runnin’ in Indy

Despite having a nickname of “Naptown” and being the place where sliced Wonder Bread started in 1921, Indianapolis boosters say that doesn’t mean their city is sleepy or boring. Instead they argue the nickname comes from one syllable in their city’s name, Indianapolis, and some say it implies a cool, urban, edgy vibe. In any event the tourism industry prides itself on down-to-earth, friendly Hoosier Hospitality. The city is also home to the largest sporting facility in the world, the Indianapolis Motor Speedway.

Visit Indy has information about visiting the area here.

Things to See and Do Around Indianapolis