Fort McMurray International Airport is less than 9½ miles (15 km) southeast of downtown Fort McMurray, or “Fort Mac,” as it’s called locally. Technically, Fort Mac isn’t a city, but an urban service area within the larger Regional Municipality of Wood Buffalo in northeast Alberta. The municipality covers 37,555 square miles (97,267 square kilometers) making it larger than the country of Portugal or the U.S. state of Indiana. It also encompasses eight hamlets and 39 other localities.

Surrounded by boreal forest, or snow forest, at the confluence of four rivers – Athabasca, Clearwater, Hangingstone and Horse – Fort Mac is an economic boomtown thanks to the Athabasca oil sands, the world’s largest proven reservoir of crude bitumen, containing an estimated 166.3 billion barrels. Bitumen oil deposits are so heavy and thick – hence the description “oil sands” – they must be heated or diluted to liquify to the consistency of cold molasses. Although the first written description of the oil sands dates back to 1790, exploration didn’t start for another 130 years and significant development didn’t begin until after the global oil crisis of the 1970s.

The ease of getting around the region varies depending on the time of year. Winter travel is facilitated by ice roads over frozen lakes that take more direct routes rather than circumventing water. Fort Chipewyan, or “Fort Chip,” a hamlet inside the Regional Municipality of Wood Buffalo, is a 99-mile (159.5-km) drive from Fort Mac on the winter ice road and from there it’s another 212 miles (340 km) to Fort Smith, across the provincial line in Northwest Territories. In summer, the options for getting to Fort Chip are either a boat or a plane – there is no permanent road from any direction. The ice road between Fort McMurray and Fort Chipewyan is maintained by the Wood Buffalo municipality, which provides road condition information here and the ice road onward north through Wood Buffalo National Park is maintained by Parks Canada, which provides information on conditions here.

The exact population of Wood Buffalo has been difficult to pin down because local officials have disagreed with the numbers produced by the national government. Statistics Canada, the national statistical agency, puts the number at just over 72,000 but local officials argue that is an estimation based on data extrapolation and actual door-to-door census have found the population is at least 40% higher, and now exceeds 125,000.

Fort McMurray International Airport’s 161,458 square-foot main terminal is a modern spacious three-level facility opened June 9, 2014. It has received architectural accolades for its design and sustainability innovations themed to the boreal forests of the area, highlighted by large pine wood beams used to support the roof. The terminal has four gate jet bridges and parking positions for another four airliners. The lower level of the terminal contains baggage claim, the second level is for ticketing and departures and the third level includes an observation area.

Inside the terminal, Vancouver-based Earls Kitchen + Bar has a sit-down restaurant, lounge and grab-and-go counter near the gates in the post-security area. There are also quick-service food options and convenience retail stores located both pre- and post-security.

Ground transportation options for arriving passengers at the airport include rental car companies and the airport’s licensed taxi service United Class Cabs. Car and limousine services as well as hotel shuttles can be pre-arranged to meet arriving passengers. Uber also operates in Fort McMurray. Public transit is available at the terminal via Route 11 of Wood Buffalo Transit, or Woosh, as it is branded. The scheduled travel time to downtown Fort McMurray is about 30 minutes.

The mesmerizing, dynamic displays known as the Northern Lights beckon visitors to bundle up, bring a nice hot drink and watch the night sky dance across northern Alberta. There is plenty of space to see it in Wood Buffalo National Park covering more than 11.1 million acres. Established in 1922 to protect free-roaming mountain buffalo, or wood buffalo, it was designated a World Heritage Site in 1983 by UNESCO (United Nations Educational, Scientific and Cultural Organization). The park has also been designated a dark-sky preserve by the Royal Astronomical Society of Canada. To see the Northern Lights you can book a guide or take it in on your own. Activities for during the day in the area can include snowmobiling, ice fishing and either downhill or cross-country skiing. Vista Ridge is an all-seasons park for the whole family featuring skiing, riding and slides. If you happen to come during the annual WinterPLAY festival, usually in February, you will enjoy the spirit of the region featuring ice sculptures, dog sled and horse wagon rides, ice slides and skating plus musical fireworks shows.

Things to See and Do Around Fort McMurray

Fort McMurray is the wealthiest city in Canada 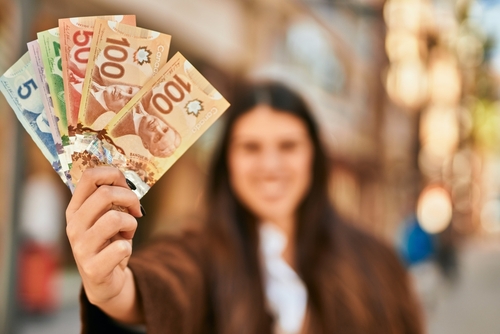 With an average annual household income of $189,458 in 2020, according to Statistics Canada, that’s more than 2½ times the national average. Average annual base pay is $70,304. And, yes, as explained above, Fort McMurray is technically not a city so that income statistic is for the municipality of Wood Buffalo. If you want to talk technicalities Fort McMurray was not a fort, in the military sense. Like many other forts in Canada, it was a fur trading post. In this case the trading post was established in 1870 by the Hudson’s Bay Company and is named for the man who was put in charge of it, William McMurray, a Métis man, the son of a First Nation mother and a European (Irish) father.