As Canada’s fifth busiest airport, Edmonton International serves the provincial capital region of Alberta and its population of more than 1.8 million. The airport is in Leduc, about 16 miles (26 km) southwest of downtown Edmonton, the northernmost large city in North America. YEG plays a critical role in the region being a logistics hub, for passengers and cargo. The airport is also the headquarters for Flair Airlines.

Located on the North Saskatchewan River in central Alberta, Edmonton’s first inhabitants had settled in the area by 3,000 BC and in all likelihood arrived as much as 7,000 years earlier when the last ice age ended creating water that allowed plants and wildlife to thrive. European fur traders arrived in the area at the end of the 18th century and by 1802 had established forts at what is now downtown Edmonton. The region’s economy has centered around oil and gas, although in more recent years technology and research have become increasingly important. As the provincial capital, the public sector accounts for about 12% of employment.

The Edmonton airport terminal is one large building with gates spread out over concourses extending north and south from a Central Hall, which serves as a lobby and contains airline check-in counters with the exits and entrances to/from airline gates and Customs, including pre-clearance for passengers departing to the United States.

In the terminal there are a couple of retail and quick-service food outlets in the pre-security area. Most concessions are located after security. After pre-clearing U.S. Customs in the airport, departing passengers are considered to be in the United States so the post-security area for U.S.-bound passengers is separate from the departure areas for passengers going to other destinations. After clearing security and Customs, U.S.-bound travelers have access to a quick-service restaurant, a coffee shop and a few retail stores, including a duty free shop.

Passengers arriving at Edmonton have numerous ground transportation options for leaving the airport. Car rental companies are located outside door 8 on the arrivals level. Taxis and car services are outside door 9 (note that fares for these services are regulated based on a zone system). App-based ride service Uber meets passengers outside door 10 on the arrivals level. Hotel and regional shuttle services are also available at the airport. Public transit options include Edmonton Transit System’s 747 express bus between the airport and Century Park Transit Centre where transfers are available to numerous routes throughout the metropolitan area. Also two local routes of Leduc Transit serve the airport.

Flair Airlines passengers arriving Edmonton go through Canada Border Services Agency Customs and retrieve checked bags at the south end of the arrivals, or lower level. Departing Flair Airlines passengers can check-in online starting 24 hours ahead of scheduled departure. The bag drop counters in the airport open three hours before scheduled departure. U.S.-bound passengers check-in at the south end of the ticketing lobby where there is an entrance to U.S. Customs and Border Protection. Tucson-bound passengers pre-clear U.S. Customs at Edmonton airport. The airport check-in counter opens three hours before departure and all check-in closes one hour before departure.

There’s a reason Edmonton is nicknamed “Canada’s Festival City” – they have more than 50 of them scheduled throughout the year, including several in winter such as Ice on Whyte,  Deep Freeze Byzantine Winter Fête, Silver Skate Festival and Flying Canoë Volant, a unique early March festival based on the indigenous-influenced French-Canadian legend of the Chasse-galerie or “Flying Canoe” that includes canoe races down a hill and a cabaret with live music, ice bar, and food at La Cité Francophone. All winter-long there is world-class skiing three hours away at Jasper National Park in the Canadian Rockies where they really go all out for the annual two-week Jasper in January festival. If Jasper is too far away, you can ski inside the city limits at Snow Valley Edmonton.

Get information for your visit at Explore Edmonton.

Things to See and Do Around Edmonton

The largest shopping mall in the Americas is in Edmonton 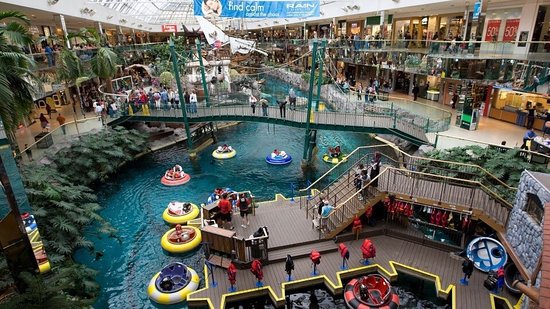 At 3.77 million square feet, the West Edmonton Mall is the equivalent of 48 city blocks and boasts a 6-acre water park with an indoor wave pool large enough for 40,000 swimmers, the world’s largest indoor triple loop roller coaster at 4,189 feet long that includes a 5-G force in the second loop, the world’s largest indoor permanent bungee tower at 106 feet plus an ice rink and Sea Life Caverns with turtles, sharks and penguins. There are more than 800 stores and services in the mall with parking for 20,000 cars.