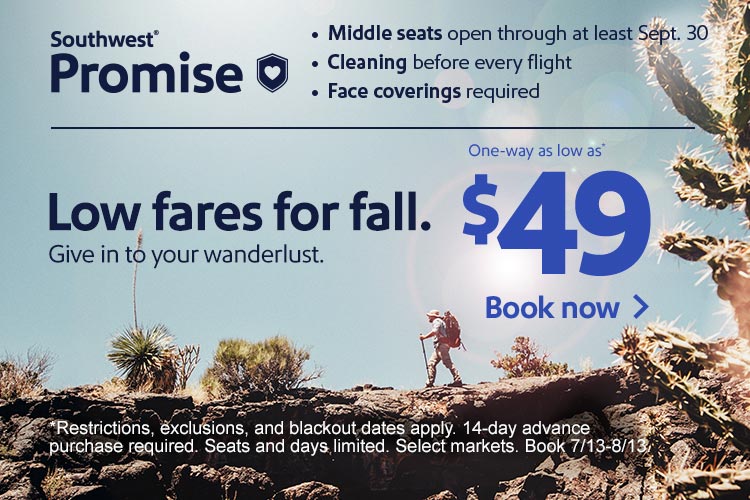 Are you tired of being cooped up? If you are ready to fly, Southwest Airlines is offering fall fares to help you with your wanderlust. Starting as low as $49 one-way on nonstop flights from Tucson to Las Vegas, Los Angeles and San Diego. But that’s not all, sale fares are also available on connecting flights – as low as $159 one-way to Orlando and Washington, D.C. or $179 to Boston and New York, along with more than 60 destinations available at the same or even lower fares.

And in keeping with the Southwest promise, middle seats will remain open through at least September 30, along with numerous safety enhancements to protect your health.

These fares are good on Southwest flights August 11-December 17, 2020, and must be booked by 9:59 p.m. (Tucson time) August 13 and at least 14 days in advance of the flight. Fares are non-refundable. Seats are limited and other restrictions apply, including some days that are not available. (Read the fine print at the bottom of this page.)

Other discount nonstop fares are $79 to either Denver or San Jose, Calif., or $109 to Chicago.

Click links below to select dates and to book. Quoted fares are one way and require a one-stop connection unless it is a nonstop.

Fly from Tucson to: